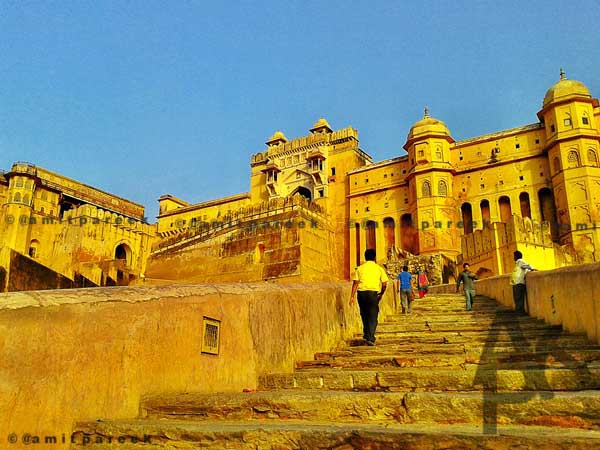 Amer palace is located in amer, a town with an area of 4 square kilometers, 11 kilometers from Jaipur, Rajasthan state, India. Amer city was originally built by clan of meenas and later it was ruled by Kachwah Rajputs. Amer palace is a part of world heritage monuments. It is the principal tourist attractions in the Jaipur area, located high on a hill. It has been listed by the world monument fund (WMF) as one of the 100 endangered sites in the world. It is also pronounced as Amber.

Amber palace built with red sandstone and marble. The palace is divided in four level layout plan each with a courtyard. Level of the palace is

In first level consisting of the Diwan-e-Aam or the Hall of public Audience Where the king meets with people of his state and listen there problems and give them justice. We can say it’s like as our modern courts.

The another part is Sheesh Mahal (mirror palace) or Jai Mandir. Science say we can’t see stars in morning but (Din mai tare) if I told this thing to a scientist he surely thing I am mad but there is a logic behind that the ceiling of the Sheesh Mahal is exquisitely beautified with glass inlaid panels and multi-mirrored ceilings. The mirror mosaics and colored glass were “glittering jewel box in flickering candle light” and this thing looks like we see stars in the morning.

The Sukh Niwas where a cool climate is artificially created by winds that blow over the water cascade within the palace. The palace was lived in by the Rajput Maharajas and their families. At the entrance to the place near the fort’s Ganesh Gate, there is also a temple dedicated to Sila Devi, a goddess of chaitanya cult which was given to Raja Man Singh (Kachwaha Rajput) when he had defeated the Raja of Jessore, Bengal in 1604. (Jessore is now in Bangladesh).

This palace along with Jaigarh Fort, located immediately above on the Cheel ka Teela (Hill of Eagles) Of the same Aravali range of hills, is considered as one complex, as the two are well connected by a subterranean passage as an escape route in times of war for the royal family members and others in the Amer Fort to shift to the more redoubtable Jaigarh Fort.

Annual tourist visitation to the Amer palace in Amer town was reported by the Superintendent of Department of Archaeology and Museums for the Amer palace as 5000 visitors were reported during 2007.

The Amer town itself, which is an integral and inevitable entry point to the Amer palace, is now a heritage town with its economy dependent on the large influx of tourists. Most of the guides tourists see in palace are locals of amer and they known the interesting stories which you cannot find in books or in internet. So if you want to know more about the city. So please come and explore the new world of heritage, culture, peace and explore in your way and then you can find the my city my world is now your city and your world.