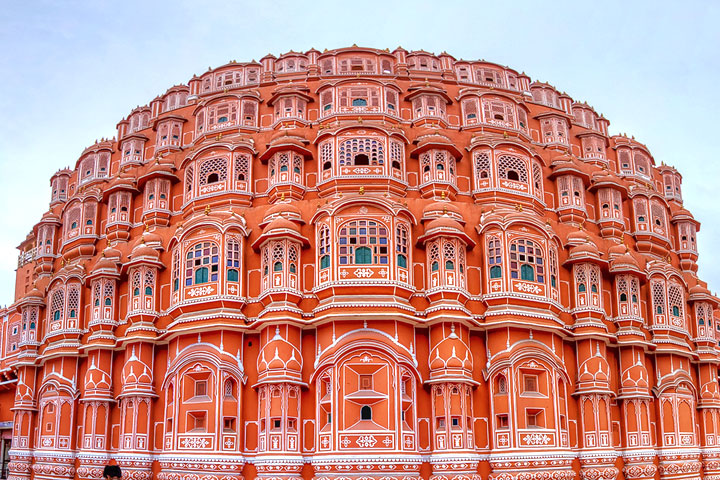 Hawa Mahal the crown of Jaipur

When you think about travel to a city first you draw a picture in your mind which symbolizes that city. Every city have many attraction like heritage monument, modern sculpture, grandest hotels and many more but there is always a grandest from all that stands as a symbol of the city.

Just like New-York city have statue of liberty, England have big Benn, Delhi defines Red fort, and Agra city defines the Taj-Mahal and this view also applied to Jaipur the city of heritage.

Hawa-Mahal is the emblem of Jaipur city. People also called it the “wind palace” & “Honey-comb”. Innumerable tourist comes to jaipur city from all over the world every year, and the secret behind is a tall five storey building which is ornamented with the aura of pink city and persuadable to behold the craftsmanship of jaipur the city of heritage.

Many people who live in Jaipur they are amazed that it doesn’t have any carving and other embellishments but it is the central attraction of Jaipur tectonics. Jaipur which have Amer fort, Jaigrah fort, Chandra mahal, Mubarak mahal and many more majestic structure but Hawa mahal dominate all of them.

Information about Hawa Mahal history, why & who built HawaMahal Jaipur?

Every monument has its history and stories of its own. But as the time passes, we only recalls and look on its structure and architecture like how it looks and what style of it is made and took a picture and posted on different social accounts but never thought about the conditions of that time, and the struggle of a man and his dedication for making that structure.

Since 1733 Jaipur city was well colonize but when hawa-mahal start to built not else jaipur and Rajasthan but also the entire north India has passing through the dark period of history. I am surprised to know that in that time period when that man does not have pleasantness for a single day for both his life and kingdom. How can a man imagine to built a vainglory building and fulfill his dreams into a reality ?

In 1788 Sawai Pratap Singh crowned the king of jaipur in difficult situation. In his entire life he fought many times to Maratha army and gives taxes to them for the safety of his men and his state and he is also surrounded by the internal conspiracy and discord in his court. But he is a calm and brave person. In all attacks, unorganized court and discord Sawai Pratap Singh faces all the problems with peace of mind. Pratap Singh was also a poet, and an art lover that’s why he was able to built an originative palace in the tough situation.

In 1799 Sawai Pratap Singh built the hawa mahal. It is five story and 50 feet tall building. It was designed by lal chand usta he was the architect of the palace. Pratap Singh wants to build a building that symbolizes both art and architecture.

And second reason to build this palace was that in that time period there was a Pardha Pratha for royal ladies. Royal ladies were not to allow going in public and seen by anyone, but they want to saw the daily life of city and various parades organized in various festival of jaipur. So that king wants a palace where queens can live freely and can watch the daily life of city not seen by anyone. And that’s why lal chand usta made a palace which have lots of windows and lattices and from outside people cannot see anything properly because windows are small.

There is big courtyard and many rooms where royal queens can live freely and from top floors they can see great view of jaipur city, jantar-mantar, city palace and street market. There is a secret tunnel from this queens can easily come from the city palace to the hawa mahal and not seen by anyone. Because of many windows there is lots of air and because of that the palace is named “Hawa-Mahal” means wind palace.

Hawa Mahal designed is dedicated to the Hindu god lord Krishna and the building is looks like a crown of lord Krishna. Many people see the hawa mahal from the street view and thought that is the front of the palace but in reality it is the front of palace but in reality it is the back of that structure. There are 953 small windows with complex latticework. Many people saw the palace form outside and say see off to jaipur.

But there is lot of things to see in hawa mahal from the perspective of architectural view. The palace is built from red sandstone. It is a fusion of rajput and mughal architecture. Entry gate of the palace is from west door. It opens into a large courtyard which has double storyed building on three sides. By moving forward there is another courtyard and in the middle of that there is a reservoir of white marble which looks amazing for going one courtyard to another courtyard there is a entry gate and in both side of gate there is an idol of gatekeeper and gods built from stone in gate.

In the second courtyard there is circuitous slope instead of stairs for going to the upper storey. In hawa mahal there is no stairs for going to upper floors in building. In the second and third floor in front of rooms both side there is gallery with open roof. In fourth floor there is another corridor in the middle. The top level of palace narrowed from middle and every floor is narrowed in there ratio. This gives it the shape of pyramid. In both side there is domelike chatriya and from there you can see an amazing view of jaipur city.

Spite of the building is big and magnificent concurrently the walls are less than a foot thick and it was built without foundation. In fact, it is the tallest building in the world without a foundation. The five storey building managed to maintain upright because of its curved shape. If you are a photography enthusiast you have to come to hawa mahal and visit this palace and from its top storey you can get the best view of jaipur city and its monuments.

Isar Lat The skyscraper of Jaipur