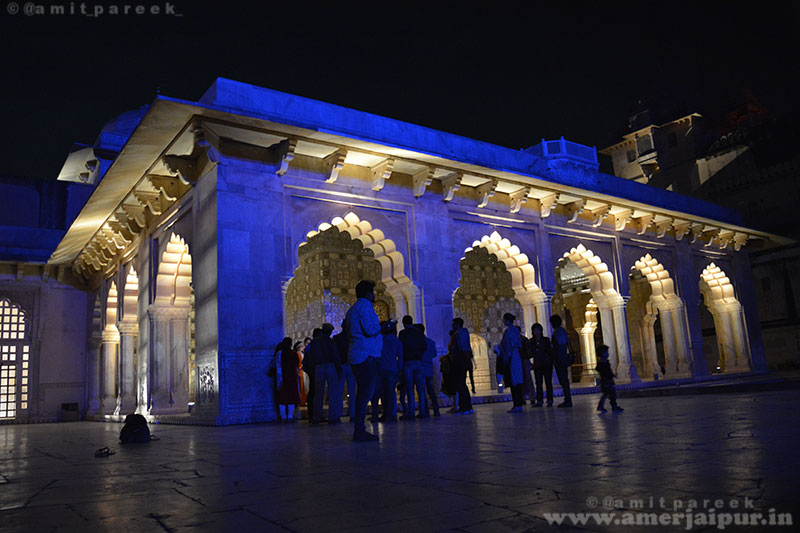 Sheesh mahal and also known as mirror palace is the magnificent piece of architecture built with beautiful precious stones and glass and with beautiful handmade paintings. Sheesh mahal is the most popular and beautiful part of Amer Fort. It is situated in Amer, Jaipur.

This palace was built by king Man Singh in 16th century and completed in 1727. It is also the foundation year of jaipur state. This palace is also known for the bollywood legendary movie “Mughal-e-Azam” iconic song “Jab pyar kiya to darna kya”. It was shot in Sheesh Mahal on legendary actress Madhubala which played the role of “Anarkali” in the movie. And the combo of both “Sheesh mahal” and Madhubala came out excellent and rest was history.

The wall and ceiling of the hall is carved with beautiful paintings and flowers which was made of pure glass and precious stone. And the placement of ceiling glass is wonderful. Because of this if someone burns two candles, then the reflection converts that small light into thousand of stars and it looks awesome and by this you can get the idea of what was the level of architecture in that time in India.

Why Sheesh mahal built and what is the need of this many people have that question in their mind. The reason behind why this mahal was made by glass because in ancient days the queen was not allowed to sleep in open air but she loved to see the stars while sleeping. So the king ordered his architects to make that kind of mahal which could solve the problem.And the architects built Sheesh mahal which was built with stones and glass and in night the reflection of two candles in glass looks like stars in whole room. And second reason was that for palace built. The King used to shift from Sukh Niwas to Sheesh Mahal in winter season. The ceiling mirror glass reflection of the candles keep the room warm. Now days entry in the Sheesh mahal is restricted however from the outside we can see the beautiful art work of the glass in the Sheesh mahal and with a flash light pointing to the ceiling we can easily see the stars in the morning “Din mai tare”.