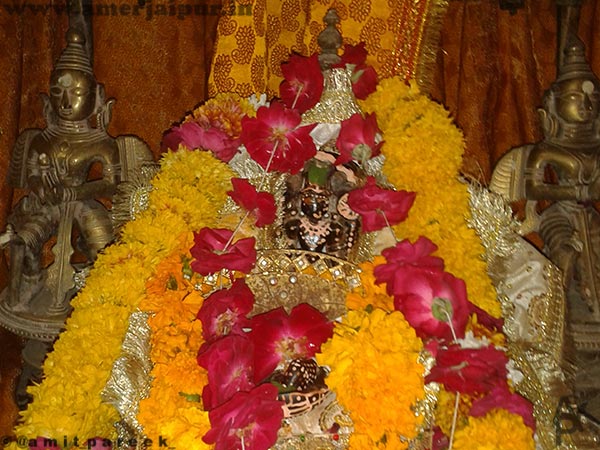 In Amer every monument is known for its architecture but it is not same in the case of Narsingh temple. It is known for its historical story rather than its architecture. It is situated on the down side of the Amer fort. Narsingh temple was the old Amer palace used by the Kings of Amber. Originally it was used by the meena kings of Susavat dynasty.

Narsingh temple was the palace of the meena king Shur Singh and queen balabai ji. Shur Singh was kind king and religious person. In India there is tradition of guru-shishya. It is spiritual relationship between guru-shishya where guru shows the right path to his student. And balabai ji was the shishya (student) of guru (teacher) parihari ji and parihari ji gave the statue of narsingh dev to the queen and said if the statue of narsingh dev goes out of temple. Then kachwaha will lose their kingdom.

So there is a question. Shur Singh was the meena king. So what is the link between Kachwaha and Meena? Shur Singh adopted kachwaha king maidal rai as his son.

Before going to dig about the story first we talk about what else we see in the Narsingh temple. Besides many rooms or courtyards you can find Raj tilak chatri, Balabai ji Sal (room) and toran gate.

In Raj tilak chatri coronation ceremony of king is done. In coronation ceremony king was blind folded and he had to choose one of the swords which was gave to him and which past king sword he choose that name was given to the new king and his name was changed by that day.

Balabai ji Sal is situated near to narsing temple in the palace it is in the back side wall of temple. All the rituals of marriage of kings were done in the balabai ji Sal.

Toran gate is existing in same courtyard with narsingh temple in old palace. In toran gate you can find all the sculpture of lord Vishnu avatar which is engraved in marble and you can find a shalok (sentence) in India ancient language Sanskrit which is write in the toran gate.

In vishvkosh it is describe that one day queen was coming from the Jagdish ji temple in the way she meets the king and she try to hide herself from the king and king could not recognized her and said “bai daro mat nikal jao” means daughter don’t afraid you can go. That day queen came to the palace but she was thinking about this incident and what she does further. When king came to palace and set beside to the queen in bed. And queen told the story to the king what happened in the temple.

Because he is religious man king decided to live life with queen as father-daughter relationship. And went to Ganga ghat and leaves his kingdom and after that his son Bhano rav ruled the state. After that Kachwaha Rajput maidal rav attack amber and killed the Bhano rav. To hear his son death Shur Singh came back from haridwar. And Meena tribe gathered together in front of kachwaha behind Shur Singh. When Maidal rav find that Shur Singh came back and he went to them and apologized for what he did to his son. Shur Singh has pity on him and adopted him as his son and gave him his kingdom.

After the death of shur singh because of that bala bai ji daily routine of ganga bathe had been shut down. And she was feeling very sad because of this. Then looking sad her guru asked bala bai ji why are you looking upset? And she told everything to her guru parihari ji. Then parihari ji with his powers avtarit the ganga in the nar singh temple.

And another interesting story, there is proverb said by people “jab tak Narsingh devali mai rajya hathali mai” when pyhari ji gave the statue of narsingh dev to balabai ji he said if the statue goes out of the boundary of temple then they lose their kingdom.

And this proverb became truth in time of king Sawai Man Singh. In January 1947 statue of narsingh dev was stole from the old palace temple to think that it was made from gold. And the thief shows this statue to his familiar goldsmith. Goldsmith checks the statue and told him that it was made form brass not from gold. And in kingdom there was pandemonium. King Man Singh was worried. If the statue was not recovered then he loses his kingdom. King told his guards to find the statue in any condition in two days. Guards caught the thief and recovered the statue from water well. And King meets to scholar pandits and did the consecration (Prana pratistha) of the statue by the pandits. And then country was get freedom from British raj. And all homesteads are going to merge into India. And after some time here was democracy in India. And kachwaha lost their empire.