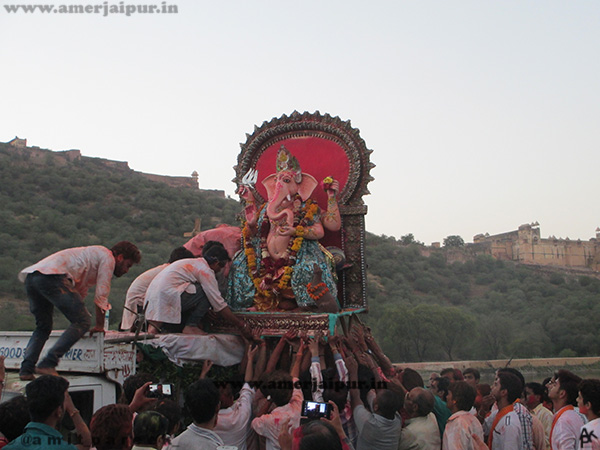 Ganesh chaturthi is the Hindu festival dedicated to Lord Ganesha son of Lord Shiva and Goddess Parvati. Ganesh is also known as Vighnaharta (obstacle-averter) and he is pratham pujya (first worshiped). In Hindu religion special events, fairs and festival, cultural programs everything start after Ganesh Vandana.

The elephant headed god Ganesh is the God of knowledge and wisdom. Ganesh chaturthi festival is the celebration of birthday of Lord Ganesha. The fest is begins in the Hindu calendar month o Bhaadrapada, starting on the shukla chaturthi, the fourth lunar day of the waxing moon fortnight. The date usually falls between August and September. The festival lasts for 10 to 12 days ending on Anant chaturdashi.

It is celebrated all over India. It is grandest and most detailed of them especially in Maharashtra and in other parts of western India and Southern India. Outside India, it is celebrated widely in Terai region of Nepal and by the Hindu community in the United States, Canada and other places.

In Jaipur Ganesh chaturthi festival is grandly celebrated. There are many big temples of lord Ganesha in Jaipur. And one of the famous is Moti Doongri temple in Jaipur. Millions of devotees come for Darshan and to celebrate Ganesh chaturthi festival in Jaipur. And in Amer there is temple of Aakede ke Ganesh ji where also thousands of devotees come from Amer region. On this day in Amer a rally is organized every year in which tableaux of Lord Ganesh participates where as in jaipur on the next day of Chaturthi a huge auspicious rally procession organized every year in Jaipur in which 40-50 tableaux participate.

In many places music concert is organized dedicated to Lord Ganesh and something that is connected with education or the arts. Weeks or even months before festival, artistic clay models of Lord Ganesha are made for sale by skilled artists. They are beautifully decorated and depict lord Ganesha in vivid poses. The size of these statues may vary from of an inch to over 70 feet.

On the day of Ganesh chaturthi everyone wake up in the morning and gather at famous temple such as Moti Doongri temple to have a view of Lord Ganesh and get his blessing. In India every hose and building has small idol of lord ganesh installed on the main gate Devotees worship this idol at their homes to get wisdom, prosperity and remove obstacles from their life. In jaipur most hindu families install their own small lay statues for worship. The idol is worshiped in every morning and evening and they offers modak and ladoos and many other sweets to lord ganesh. The daily worship end with singing the aarti in honor of Ganesh, the domestic celebrations come to end after 1, 3, 5, 7 or 11 days when the idol is taken in a procession to a large body of water. Due to environmental concerns, a number of families now avoid the large water bodies and instead let the lay statue disintegrate in a bucket of water in home.

Public celebrations are organized by local youth group of traders. The Ganesh idols are installed in temporary shelter called pandals. In jaipur after 7 or 10 days the statue is taken in a procession to the Maota Lake. In jaipur devotees prepare churma, daal, baati food as an offering for lord Ganesh and for sweets they make modak and ladoos.