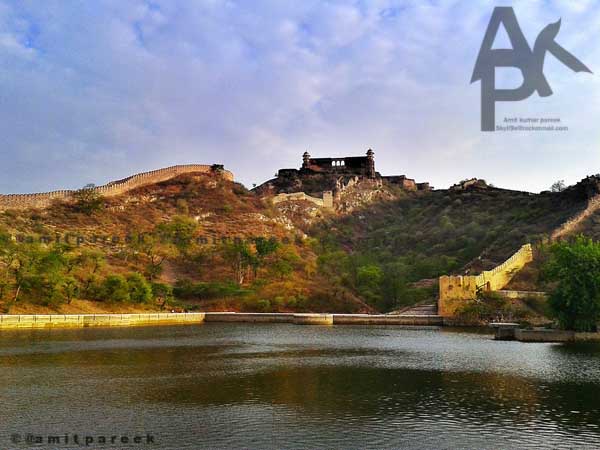 Jaigarh Fort is located on one of the peaks of the Aravalli range of hills. The fort is 10 kilometers away from jaipur city. It is also called cheel ka teela (Hill of Eagles). The Jaigarh fort is similar in structural design to the Amer palace. The fort is also known as victory fort. It has a length of 3 kilometers and width of 1 kilometer. The fort was built by Sawai Jai Sing 2 in 1726 and was named after him. The fort was built to protect the Amber palace. The fort is situated higher than amer palace and maota lake. The Jaigarh fort road leads to another important fort called the Nahargarh fort. The fort features a cannon named “jaivana”. The cannon was manufactured in the fort foundry located in fort. The fort was a centre of artillery production for the Rajputs. cannon was manufacture in 1720, it was the worlds largest cannon on wheels of the Early Modern Era. Fort have several complex Laxmi vilas, Lalit Mandir, vilas Mandir and aram mandir, an armory and a museum.

In armory complex here has a wide display of swords, shields, guns muskets and a 50 kilograms cannonball and handmade grenades and rockets. The museum is located to the left of the Awami gate it has exhibits of Photographs of Royal families, stamps and many artifacts. In display case you can see vintage uniforms of Maharajas and vintage hand drawn plan of the palaces are seen in the museum

Amer was known in the ancient period as Dhundhar. the old and original fort of Amer was ruled by clan of meenas and later it was ruled by Kachwaha Rajputs. Is what is known in the present day as Jaigarh fort, It was actually the main defensive structure rather than the palace itself. Jaigarh fort and amber palace are connected by subterranean passages and considered as one complex

The fort was built from red sandstone.There is watch tower in jaigarh fort central ground that provide a view of surrounding landscape. There are two temple in fort one is Ram Harihar temple of the 10th century and the other one is the Kal Bhairav was temple of 12th century. For the fort water was supply from Sagar Lake (an artificial Lake); water from Sagar Lake used to be transported to the fort in pouches loaded on elephant backs and also by humans carrying water pots. The water to be stored in three underground tanks below the central courtyard. One tank was used to store water and second was used to store gold and jewellery and the third one was empty. The largest tank had capacity to store 6 million gallons of water. By looking from the windows of the fort you can get beautiful view of amer. Amer is surrounding from all direction by boundary it seems that Jaigarh fort is standing tall as father and gathered all amer in his arm.