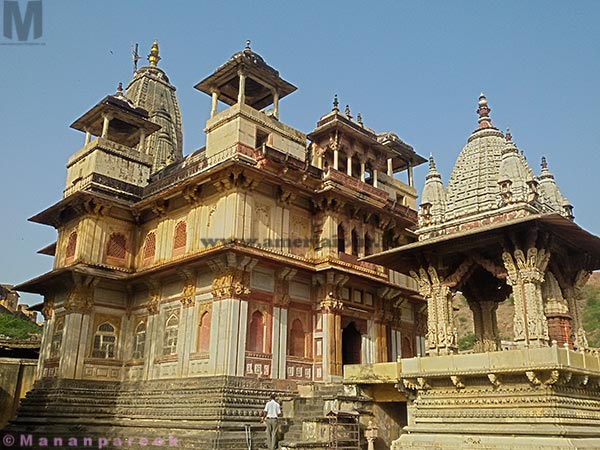 Jagat shiromani temple is situated in amer jaipur, rajasthan, India. This magnificent temple dedicated to meera bai and Lord Krishna. Meera bai is the devote of lord krishna she is the wife of mewar king though in childhood she devote to the Lord Krishna and considered him as her husband. That’s why this temple is also called Meera bai temple.

This temple has important place in the history of Amer town. This temple was built between 1599-1608 AD by the queen Kanakwati wife of king Man Singh 1st in the memory of son Jagat Singh.

This temple is near to the amer palace (fort). The temple has two entrances gate. The main entrance gate can be accessed from the main road of Amer town. The other gate is from the stair of the amer palace which leads to the inside of the temple open courtyard.

It is one of the oldest temple of Amber town. The best specimen of early 17th century Mahameru prasad. It consists of a Sanctum, Vestibule and Mandapa with Projecting screen window on either side the temple stands on a high ornate Adhisthana the three storeys Garbhagriha is crowned by Sikhara which is adorned with successive rows of urusringas and karansringas. The mandap is two storeyed with lateral transepts on either side. The walls of upper storey and ceiling bear painting the marble garuda-mandapa in front of the temple is intricately carved which is carrier of lord Vishnu.

At the entrance of the temple there is beautiful marble torna (pylon) which is flanked by statue of elephants. The toran is the marvelous piece of architecture. Jagat shiromani temple Priest Abhay sharma told us. That this toran was made from single piece of marble. And in this toran various gods idol image is intricately carved which looks very beautiful. This temple was built in Besar Style. In this temple has also god Vishnu in white marble.

There is an interesting story about this temple. It is said that the statue of Lord Krishna in this temple is same statue that Meera Bai used to worship in the state of mewar, 600 years ago. This statue was saved from destruction by rulers of Amer during Mughal war with Mewar state and brought safely to Amer. And statue was set in a temple. Even statue of Meera Bai has been set along with Lord Krishna.

Jagat shiromani temple is very important part of heritage, architecture and religious point of view. And you can feel peace here.