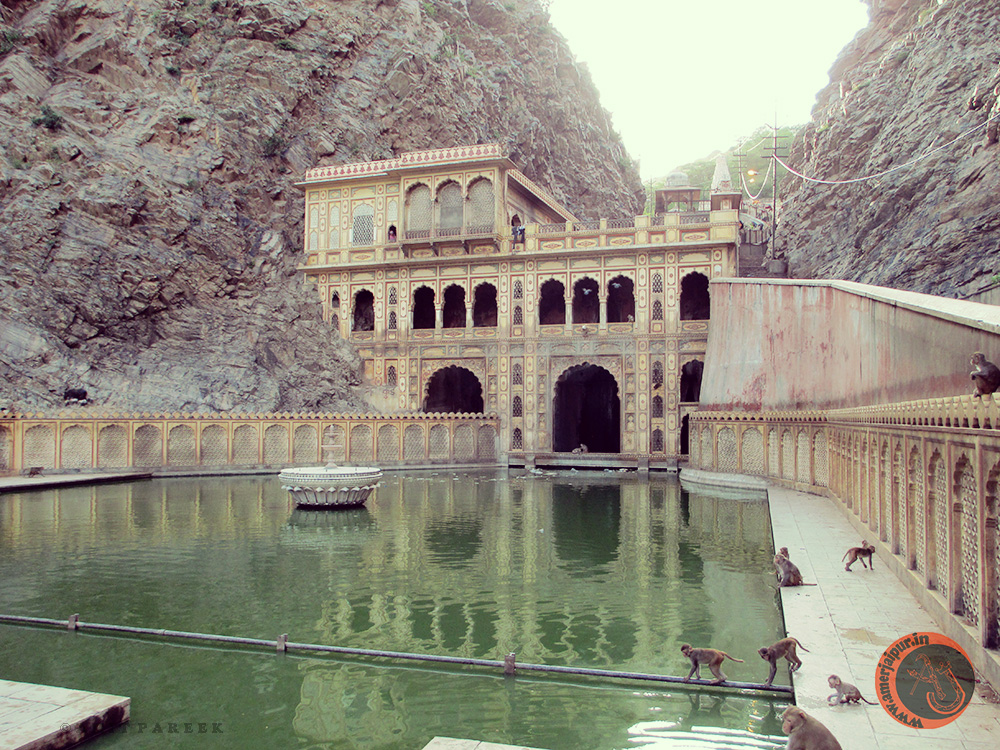 Jaipur host many historical palace, forts, temple and golden stories about these places. Which mesmerized us by listening to them? So today we are going to talk about one of the monument and stories of its making and how it makes a golden history?

Galtaji is a place situated about 10 km away in the east of jaipur in the town of khania-Balaji. In jaipur city you will find out every monument have its own unique phrase like “Hawa-Mahal” the crown of Jaipur. “Jaigarh” the victory fort and the list go on.

But galtaji has more than one phrase but difference is the perspective of the person who is going to galtaji temple. If you are pilgrim then galtaji is an ancient Hindu pilgrimage site which holds temples and kunds (Furrow) which is a holy water tank. Taking bath in this holy galta water is considered as pavitra (sacred). If you are a historian, travel enthusiast, or a person who loves to observe the wonderful places and surroundings which is filled by the nature’s fauna and flora then you will say that it is the jewel of Jaipur.

And most of the people also called galtaji the monkey temple because of the vast majority of macaque monkey. Who lives there and it is the main attraction of the tourist and net geo shoot a documentary series in 2008 about the life’s of monkeys in the galtaji named “Monkey thieves”. After the series the galta ji temple is phrase as the monkey temple of Jaipur.

Galta is a pre-historic Hindu pilgrimage site was built by Diwan Rao kriparam in the eighteenth century. Diwan rao kriparam was the courtier of Sawai Jai Singh 2nd of jaipur.

By legends it is believed that saint Galav rishi spent his whole life in search of truth and did ‘Tapasya’ for several years in galtaji. Pleased with his penance the god appeared before him and blessed his place of worship with abundant water. It has a galta kund which is a holy water tank and the water of the tank never dries. Taking bath in this holy galta kund is considered as pavitra and can wash your all sins.

To honor Saint galav rishi a temple was built here and it was named after him. One of the important facts which are linked with this galta temple is that some part of Ram Charit Manas i.e. ‘Ramayana’ is written in this temple by Goswami Tulsidas. It is said that the Galta kund has curative powers and because of it this is known as pilgrim centre.

Galata ji temple is located in the Aravalli hills and made between two cliffs of rock valley and the steps in this rock valley lead to this shrine of Rishi Galav and Hindu pilgrimage site which is surrounded by hills from all side. The temple is built from pink sandstone in eighteen century. The temple features a number of pavilions with rounded roofs carved pillars, and painted walls.

The temple looks like a mansion or a haveli because of its magnificent architecture. There are many other temples are also located in Galta ji. There is a small temple of Sun god which is built by Diwan kriparam and is located on the top of the highest peak. And from there you can see the all parts of the city. It offers a beautiful view of pink city. In the main complex of galta ji, kund fresh water spring seeps through the rocks fall from the gau-mukh (mouth of cow).

Which contains pure water and the water is kept in two tanks (kund). Many devotees gather here from various cities during Makar Sakranti to take bath in this kund for removing their sins. There are total seven kunds in Galtaji. Brahma temple is located in the complex and was built in 14th century and this is the only temple in Jaipur which is dedicated to Lord Brahma.

The Ramgopal ji Vishnu temple is also there in Galtaji This Hindu temple dedicated to lord Vishnu. It is known for its architectural beauty. And the idol of the temple is one of a kind. The legend says that the lord Krishna appeared before Goswami Tulsidas in the form of lord Rama. So in the idol you can see the image of both lord Ram and Krishna. The image of Brahma, Vishnu, Parvati and Ganesha are also made on the walls of this temple. There are pictures in the temple which shows state occasions and festival celebrations, polo match of Maharajas and Rasleela of lord Krishna and gopies.

How to reach galta temple

The temple is located at a distance of 11 km away from pink city jaipur. You can go to galta ji by two different routes. The first you can hire a taxi or auto rickshaw and drive directly to the temple. The second option is to hike to galtaji from the end of surajpol bazaar road and follows the path east through the large pink stone archway. It is an approximately 30 minutes of short hike from start to end. This route provides stunning views of the temples and jaipur while passes the sun temple.

Every year in mid January on ‘makar sakranti’ a large crowd of visitors come here to take a dip in the holy kund and in the month of savan (this month is dedicated to lord Shiva) in mid July or august where many pilgrimages comes with their kavads and stay in the galtaji for one night and in morning fill up the holy water in the kavads (urn) and start their journey to the lord Shiva temple of their choices. The visiting hours of this temple are from sunrise to sunset but evening is the best time to visit this place because the large family of monkeys are coming back from the city to temple and flocking towards the temple kunds for a bath.

The temple attracts a large numbers of tourists daily when you reach near to galtaji temple spiritual feelings develop in you. You can hear the chanting of religious hymns, and the prayers sung by the devotees.